In this blog I want to share with you some of the Birds of Prey we encountered along the roads and at the water holes during our CNP Safaris to Etosha .

At the apex of the African bird of prey pyramid is the Martial Eagle.  The female Martial Eagle who weighs in at 4.7 kg, has a wingspan of between 1.9 and 2.4 meters can take prey of up to 8 kg.   This bird strikes fear and panic into the hearts of all other birds when it is spotted soaring high above the earth.  Alarm cries go up from everywhere in the bush as it comes closer.  Birds like the Guinea Fowl scatter to the safety and shade of the thorn bushes and trees. 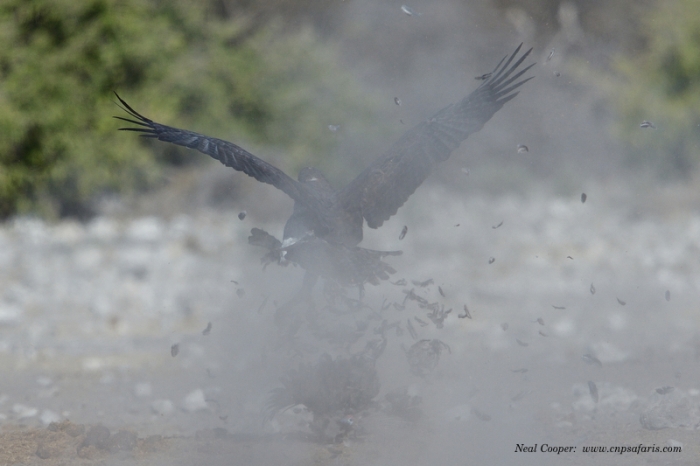 When these birds are in the sights of Martial Eagle from high above and it dives to earth at incredible speed, absolute pandemonium breaks out on the ground as the Guinea Fowl take to the air to get to safety, the Egyptian Geese fly into the middle of the water hole, the Black-necked Grebes dive to get away and the Black-backed Jackals sprint from across the open bush to the anticipated point of impact.  The noise, dust and panic is something to experience.  While all this mayhem is erupting in front of you, to then try and pick up the attacking bird who’s arc of attack is out of the sun, is a real challenge and happens at such speed that getting an in-focus images is a real bonus :-).

We were fortunate to see 3 such attacks, two of which where successful but unfortunately away from us and one unsuccessful attack which we could only watch through the front window of the vehicle.  The attack happened a mere 40 meters in front of us and straight towards us.  Nevertheless, just witnessing this is a privilege and serves to build your own frame of reference on the behaviour of these birds and their attack techniques, thus preparing you for the next event.

An Ovambo Sparrowhawk sits in a thorn tree from where it ambushes birds coming in to drink.

At another water hole there were 5 species of birds of prey active on most days.  A pair of Ovambo Sparrowhawks, a pair of Gabar Goshawks, a single Red-necked Falcon, Pale Chanting Goshawks and regular overhead passes by some Tawney Eagles.

When the Tawneys come within range the Ovambo Sparrowhawks or Red-neacked Falcons launch their attacks on the Tawneys, trying to force them from their territory.

With the exception of the Tawneys and the Pale Chanting Goshawks the Sparrow hawks, Red-necked falcon and  Goshawks actively hunted the Cape Turtle Doves and smaller birds who come in to drink.

The Goshawks hunted more by ambush, by sitting on the ground behind a log and waiting for the smaller birds to fly overhead on their way to the waters edge, when they would jump up and try an pluck them from the air.

The Sparrowhawks were much more aggressive and tried to catch the Cape Turtle Doves when they came in for a drink.  One such attack came from the right over the water, the dove turned straight toward us and the Sparrowhawk hit the Dove less than 3 meters from our safari vehicle.  The Dove fell into the only clump of grass around the water hole and the Sparrowhawk flew off.

They would also fly around the low thorn trees and bushes to flush birds and then pursue them at speed.

One of our best sightings was when we stopped to photograph a Brown Snake Eagle sitting in the top branches of a dead tree.  These birds have a wingspan of up t0 1.8 m and feed mainly on snakes.  Its legs are protected by scales which provide some protection against snake bites.

We had only taken a few frames when it focussed on something on the ground to its left and dove down.  I reversed our vehicle in time to see it take to the air with a large Zebra snake.  The snake was clearly still alive as it landed on another dead tree and curled around the branches.

The Snake Eagle then proceeded to kill the Zebra snake by crushing its head before starting to eat it head first.  It had not eaten more than a third of the snake when the snake slipped from its grasp and it fell to the ground.  The bird had no urgency to go and pick it up and we had run out of time so we had to leave the Snake Eagle perched in the tree.  This was a really special sighting for all of us in the CNP vehicle.

These Birds of Prey do not have it all their own way and when they do land on the ground or in a tree they always draw the unwanted attentions of the local Lilac-breasted Rollers and Lapwings.  The Crowned Lapwings kept on attacking this Tawney Eagle relentlessly until it had had enough and flew away.

Join CNP Safaris on a photographic safari and share in some amazing experiences and great photographic opportunities from the comfort of our specialist photography boats and vehicles.

One thought on “Etosha – Birds of Prey”